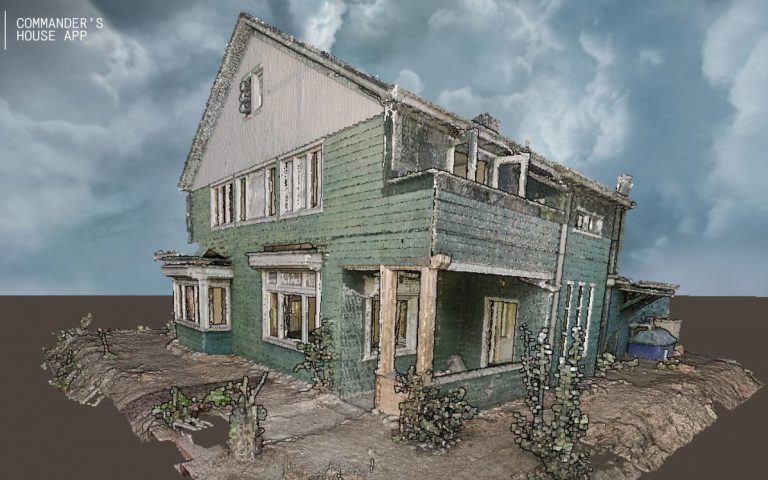 Welcome to the Westerbork commander’s house app. This app will take you on a digital tour through the house of the camp commander and gives you information on the camp and the house through the years.

The app works best on a modern browser with GPU hardware acceleration enabled. This is important since the app displays 3D data and is consequently quite graphically heavy. By default this should be enabled on modern browsers, however this is not always the case. If in doubt see here for Chrome or here for Firefox. The app might also be usable without having this enabled, however the experience could be disappointing.

iC-ACCESS (Accessing Campscapes: Inclusive Strategies for Using European Conflicted Heritage) looks at former concentration camps as traces and intangible reminders of the 20th century mass violence and terror as well as at their present uses, and abuses, in (trans)national stately and cultural contexts.

This EU collaborative and interdisciplinary research project aims to develop inclusive strategies to provide access to Nazi and Stalinist ‘campscapes’ as sites of remembrance, education, and research. In most post-war European countries former Nazi concentration and extermination camps have become icons of antifascist resistance and the Holocaust. They were followed after 1989 by former communist and Gulag punishment and forced labour camps considered as new icons of Soviet terror and occupation. Together the camps have come to play a consistent role in Europe’s rethinking of totalitarianism and genocide. Therefore iC-ACCESS addresses their future role as vital, though contested monuments of the 20th century ‘era of camps’. This is far from a straight-forward process in the current, dynamic context of Europeanization, on the one hand, and Euroscepticism on the other. Most of the camps have long been demolished without physical remnants, others are either monumentalized as national symbols or suddenly face the misuse of their conflicted past for populist politics of identity. Hence the challenge of a sustainable, truthful and reliable (re-)use of these often-contested ‘heritagescapes’ demands a transnational, interdisciplinary and integrated approach.

Research questions include: How do we best valorize their dissonant heritage, given the multiplicity of users, memorial practices and visitor expectation, incorporate and display testimonial material of their problematic history, and preserve, use and add value to them? This project examines campscapes: Westerbork, Bergen-Belsen, Treblinka, Falstad, Jasenovac, Lety, and Jáchymov. The objectives are three-fold: to evaluate the cultural dynamics and narratives that have shaped the safeguarding and significance of these selected campscapes; to identify and analyze the ethics and practices of their preservation and presentation; and finally to develop state-of-the-art strategies and implement innovative tools which provide sustainable in-situ and virtual forms of investigation, presentation and representation.

Through new transnational partnerships, outputs of the project include 1) publications and educational materials, 2) workshops and community interventions, 3) digital mapping and interactive display tools; these will unravel and problematize new physical evidence and heritage paradoxes, and stimulate further research, exchange, and debate. Together with relevant stakeholders, the project shares cutting-edge ways of increasing inclusivity and accessibility to European campscapes.

The application was build using Vue for the UI and Potree for the visualization of point clouds.